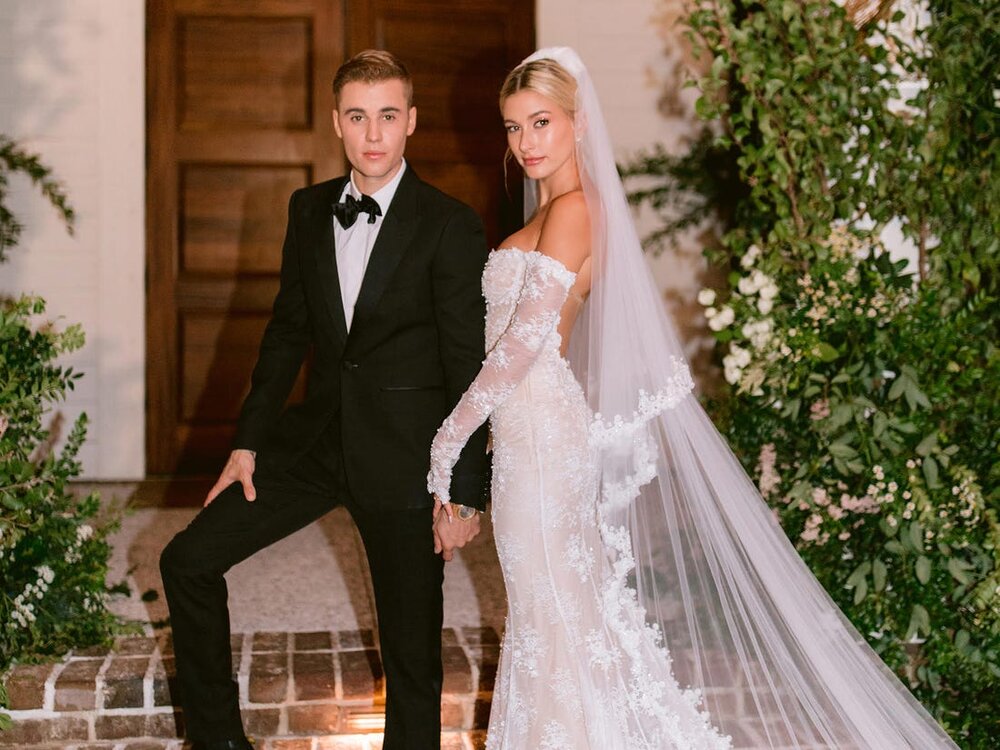 This wedding was undeniably one of our favorites! With stars like Kendall and Kylie Jenner, Scooter Braun, and Usher attending, and Hailey have three different dresses throughout the night, this wedding was so fun to see!

Our favorite star from Lizzie McGuire married her fiancé Matthew Koma December 21st at their Los Angeles home. It was a small ceremony with family and friends, and then a fun reception in a white tent in their yard. Our personal favorite part of the Duff/Koma wedding was Hilary’s stunning Jenny Packham gown, custom made in London.

On October 5th Jeffrey Dean Morgan married his long-time girlfriend Hilarie Burton. It was a small wedding with family friends. Hilarie posted a statement on Instagram “Jeff and I just want to put it out there that WE GOT MARRIED! For real. We’ve lived as husband and wife for a decade. We’ve built a family, and a farm and found our community… Rather than make vows right out of the gate, we lived them. For over ten years. The good times and the bad. Standing up there with our children at our sides—celebrating all that has been—was bliss."

Ellie Goulding and Caspar Jopling were married in a very elegant and classic english ceremony. They were married August 31st in York, England at the York Minster. Big name friends like Katy Perry, Orlando Bloom, and Sienna Miller. Royals Princess Eugenie, Princess Beatrice, and Sarah, Duchess of York were at the ceremony!

The Rock married his longtime girlfriend in Hawai’i on August 18th. Lauren posted on her instagram, "We do. August 18, 2019,"

Another big wedding took place in Hawai’i, Miles Teller and Keleigh Sperry tied the knot on the island over Labor Day weekend!

Chris Pratt and Katherine Schwarzenegger had an exclusive wedding June 8th at the San Ysidro Ranch in Montecito, California.

In May, Sophie Turner and Joe Jonas had a surprise wedding in Vegas, which included ring pops, an Elvis impersonator and the Jonas Brothers! This event was live streamed by Diplo, of course. Then on June 29th, the couple had exchanged vows at their second wedding in France.

This stunning couple got married April 26th in Marrakech, Morocco. They had a lavish ceremony and each looked absolutely incredible!

Lea Michele finally got the wedding she deserves with her love, Zandy Reich! They had an intimate ceremony with loved ones March 9th. The couple released to People Magazine a statement: “We are so excited to be married and grateful to be surrounded by our friends and family. And most of all, we’re so happy to spend the rest of our lives together.”

Bachelor Nation was excited to see the Burnham and Luyendyk wedding that took place in Hawaii earlier this year. January 12th was the special day Arie and Lauren tied the knot with Chris Harrison officiating. Soon after in May, they had their first daughter. Lauren’s dress was perfect for the tropical venue, flowy and lightweight, but nothing less than glam with her fully beaded bodice and trim.

This couple had a very low-key wedding on January 26th. Miranda posted on her Instagram "My heart is full. Thank you Brendan McLoughlin for loving me for.... Me."

Chance the Rapper and Kirsten Corley

Chance the Rapper married his childhood sweetheart on March 9th.  They were married in Newport Beach, California, under a rotunda that overlooked the ocean.

Website uses cookies to give you personalized shopping and marketing experiences. By continuing to use our site, you agree to our use of cookies. Learn more here.